To begin this post, I want you all to imagine your worst enemy. Girls, picture that guy that never called you back, or the bitch who stole your elliptical in the gym. Guys (if there are any reading this review of The Bachelorette), picture someone who hit on your significant other, or, if you are my dad, picture President Barack Obama. It’s necessary that you all have this enemy in mind before reading this post. I am about to talk about one of the contestants on The Bachelorette with the fiery rage of an ex-girlfriend that got screwed over on national television. Just so you know beforehand, his name is Nick and if you don’t already hate him, please watch this video.

Okay, I’m going to move on to this episode because I could write novels about how much I hate this guy. For the record, I am fully aware of how irrational my hatred is. But Nick screwed me over. I spent a long, long time trying to convince people that Nick deserved to win. Almost as long as I spent trying to convince people that Chris Daughtry deserved to win the 5th season of American Idol. I mean, really? Taylor Hicks is going to beat Chris Daughtry? (Okay, I have a problem, I know.) Moving on.

After Kaitlyn mentions to Clint that the guys had talked bad about him, Clint confronts the boys, and J.J. turns on Clint in front of Kaitlyn. The camera cuts from Kaitlyn talking to the boys to Clint and J.J. having a lovers’ quarrel. J.J. starts crying on camera and then slaps himself in order to pull himself together. Man, I wish they would make a television show entirely dedicated to J.J. slapping himself. That show could go on for as long as Frasier.

And then Kaitlyn throws another curveball: there will be no rose ceremony this week. J.J. takes a moment to talk to the camera where he specifies that he “is not looking for a boyfriend.” 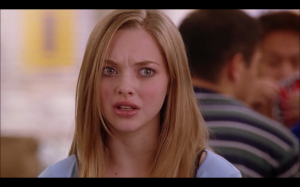 Thanks so much for clearing that up for us, J.J. For a second I thought I was watching the first ever gay season of The Bachelor, but now I understand.

The camera pans to the crowd at the beginning of the battle and there is Nick (see above rant). For this part of the episode, I’m so embarrassed by the boys’ performances that I have to close my eyes. I opened my eyes just enough to see Shawn B. flash his abs in front of the crowd. And I think we can all agree: he’s the clear winner.

Kaitlyn goes over to talk to Nick. He asks her if he can come on the show. The boys find out and are pissed. To conclude her night of great decisions, Kaitlyn sneaks off of the boat to go make out with Nick.

(Also I should mention that this is the point of the night when I cried out loudly in the communal television room where I am watching The Bachelorette.)

The cameras flash to the boys back at the hotel where Jared gets the one-on-one date. Back on the boat, Kaitlyn gives Justin the group date rose after he validates her feelings toward Nick and says that he wouldn’t mind Nick coming on the show. I think Joshua sums it up best when he says, “Another dude?!? My god!”

Kaitlyn goes to get her hair done at the hairdresser, where her hairdresser, Ashley, offers up some much-needed advice. The sheer amount of knowledge that hairdressers have in the world is mind-boggling. She leaves a few hours later with no helpful advice, and her hair looking identical to when she walked in to the salon.

Kaitlyn’s one-on-one date with Jared is at the Metropolitan Museum of Art, and, despite my dead-set hatred of Jared, he looks really good in his tux. He also seems to genuinely care about her and want her to be happy, which makes me hate him and love him all at the same time. He writes and recites to her a love poem and my heart melts a little bit. Jared leaves The Met with the rose and they LITERALLY ride off in a helicopter together. Okay, ABC, you’ve got me.

The second group date brings the boys to Broadway to learn a bunch of the dances from Aladdin. The boys also have to sing along to the songs, but don’t worry. Cupcake Chris sings a lot in his shower. For the most part, the guys are awful. Joshua looks as if he has never danced before. I know he is from the midwest but unless he hails from the midwestern town from the movie Footloose, his dancing skills are really unacceptable.

“Cupcake” Chris, the dentist, is taking the group date activity really seriously. For those of you that don’t remember which one Chris is, here you go: 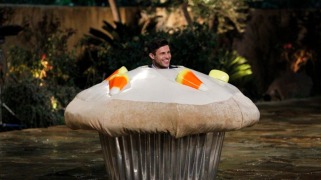 I feel like I constantly need to emphasize how weird this guy is. And yet, he gets chosen to perform on stage in tonight’s live show of Aladdin, alongside Kaitlyn. The best part is when Cupcake Chris tries to explain how he relates to the story of a street rat chasing after the beautiful princess. Yeah, right. Honestly, If a genie gave me three wishes right now I would immediately wish Nick V., J.J. and Cupcake Chris gone. I can wait until the next genie comes around to wish for world peace.

Chris and Kaitlyn climb up to the top of the New Year’s Eve ball in Times Square. The best part is when Chris proclaims Times Square “the center of the world.” Oh, boy.

Back at the hotel, elevator music plays as we watch Nick ride up to the top floor. ABC definitely found a soundtrack that truly displays the awkwardness of the moment. He opens the room and greets the guys and the credits role.

The very end of the show has Brady and Britt hanging out on a California beach and I could literally care less. Sorry, that’s a little harsh, but they aren’t on the show anymore and I’m very emotional.

My Picks: EVERYONE EXCEPT FOR NICK V.