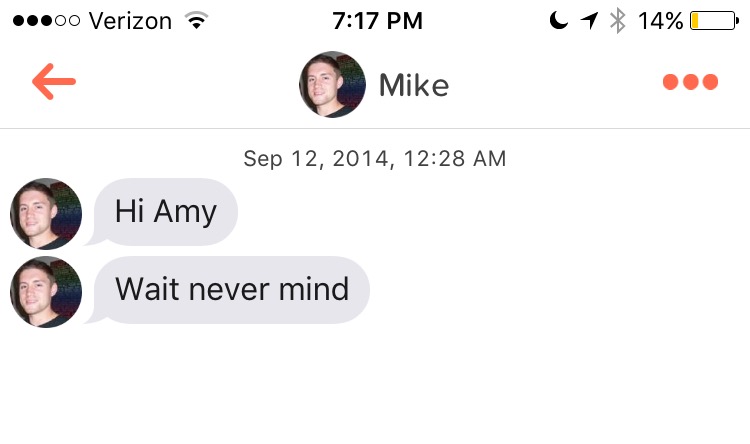 This holiday season, in the presence of several of my fully-grown, 401k-possessing, gainfully-employed cousins, I opened up an app on my phone in order to explain to them why the dating culture in college is so weird these days. And, as all of you literate folk who read the title of this blog post before clicking on it have probably guessed, yes it was Tinder. I’m sure there is a cooler, newer dating app I could’ve found, something like Hinge, or Bumble, or GrubHub, but I’m not with-it enough to have tried out any of the new and cool ones. Also, I’m beginning to think I might be using GrubHub wrong.

Amongst these cousins I retrieved Tinder message after Tinder message from some of my past flames and read them aloud, attempting to shed some light on the dating culture in college right now. Messages that I had ignored the first time around still sat there, accurately representing some of the archetypes of boys (note: not yet mature enough to be called men) that I’ve found on the app. And it inspired this blog post, a tribute to the boys. Alternate title to this post: Let’s Hear it For the Boys, Oh Let’s Give the Boys a Hand. (Taken from Track 2 on the Footloose soundtrack, Let’s Hear it For the Boy)

So here goes nothing.

I’m not proud of it, but I’ve been on Tinder. And, buried beneath that little red flame emoji displayed on the app, thousands and thousands of guys are hiding ready to accost you with cyber messages both profane and unnecessarily aggressive.

Somehow, even with the power to set your age range to 20 to 25 year-olds and your location range to two miles away or closer, you still never know what you’re going to get when you open the app. And somehow, despite the fact that we’re living in 2015, almost 2016, these guys are completely unoriginal. Whether it’s their Tinder biographies, “Harvard 2016,” or their interests, “Kid Cudi,” these guys are terribly uninventive.*

*Side note, I’ve never thought, “Wow, this guy and I both like Kid Cudi, we have so much in common.”

So why am I still on Tinder? Stealing a line from my favorite Emmy-award-winning drama, The Bachelor (okay, not Emmy-award-winning), I am on the app for the right reasons. I’m on it to find true love and to meet my soul mate, just like everybody else that uses the app.

Okay, I’m only joking. I’m not looking to find anyone special on Tinder. I’m mostly on the app in order to silently judge the opposite sex based on their appearance and their 150-character biographies. And I’m a harsh judge, I’ll give you that. But I am constantly surprised by the interactions I’ve had on the app, and, if you’d like to hear about it, I’d love to tell you about some of the potential suitors I’ve met so far.

Meet Ethan. Ethan is 22 years old and “a huge gear head.” He loves cars, and is open about the fact that he is “athletic.” His interests include “going out” as well as “having a good time.” I’m trying to cut Ethan some slack, after all he’s really opening up here. He must be feeling pretty vulnerable after revealing all of this deep and personal information about himself. He also has tattoos, a fact which he includes in his bio, so it must be an important part of who he is as a guy.

Ethan is a unique type of guy, as lazy as he is derivative. The message he sends tells us two things. 1. He is mass-sending this message to every girl he matches with. 2. He is either secretly 60 years old, or he hasn’t learned a new pick up line since the millennium. 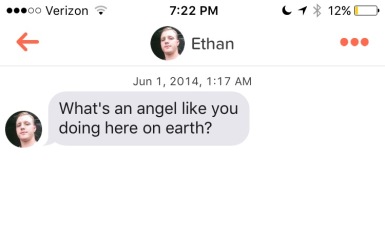 As a last note, Ethan sent his message early Sunday morning at 1:17 a.m., which leads me to believe that what he wants from this exchange is probably a deep and meaningful friendship.

But it’s time to meet Bachelor #2. Meet Tommy. Tommy is 21 years old. He’s bold, and thus chooses not to include a biography on his Tinder profile. Pictures are worth 1000 words, huh Tommy? We do, however, share mutual interests in The Office and Bob Marley. Based on his limited amount of provided photos I can also deduce that he either fishes, or likes to hold dead fish up triumphantly.

Tommy wants the world to know he is cute, and he’s not afraid to notify people one-by-one. He’s bold, what can I say? (Still not sure that bold is the right word, tbh.)

But let’s not get too hung up on Tommy. We still have to meet Bachelor #3. Meet Marco.

If you thought Tommy was bold, just wait until you meet Marco. Marco is by far the most mysterious of the three bachelors. Marco doesn’t have a Tinder biography and we don’t share any mutual interests. The only thing I know about Marco is that he is 22 years old. Well actually that’s not the only thing I know, but I’ll get to that.

There’s an air about Marco that says, “I could be anyone from a regular college student to a serial killer.” But he’s mysterious, what else do we need to know? 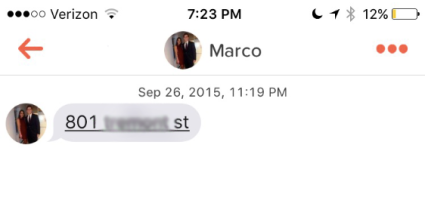 Marco isn’t messing around, he wants to meet up right this second. And the reason I know this is that he doesn’t open with a casual “Hey,” or a formal “Hello,” or even a cheesy pick-up line the likes of which Ethan would approve of. Marco decides to just send his address.

Based off the fact that he is sending his address to me at 11:19 p.m. on a Saturday, I can only assume that he and his friends are engaged in a late night Scrabble tournament and are desperate for some new competition. That’s what most people are up to at 11:00 p.m. on a Saturday night, right? Either that or Marco is trying to lure me to some abandoned rundown home where he will kill me and bury me underneath his tool shed. I really can’t shake the serial killer vibe I’m getting from him.

(Disclaimer: I’ve been binge watching way too much Criminal Minds these past two weeks, so I might be projecting a little bit.)

So these are our three bachelors. How is a girl to decide, am I right? This competition is going to be tight, and while I weigh my options let me leave you with some of my other favorite past flames (no pun intended) that I’ve met (on the internet, never in real life) via Tinder.

*Sing this to the tune of Mambo Number 5.*

A little bit of Maxwell in my life… 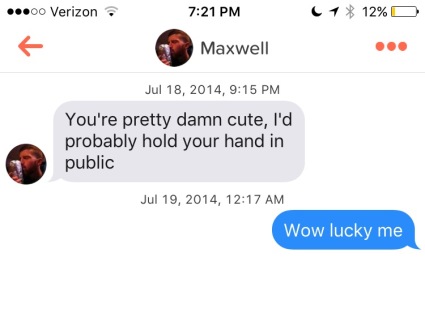 A little bit of Harrison by my side…

A little bit of Chris here I am…

A little bit of none of you makes me your man.

So to all you Tinder boys out there, it’s been lovely. I think it’s time I retire though. It’s not you, it’s me. And if in some distant place in the future, we see each other in our new lives, I will smile at you with joy, and remember how we spent a summer beneath the trees, learning from each other and growing in love. *Lifted from Noah’s last letter to Allie in The Notebook*

UPDATE: As of the first of the new year, Marco is still interested. He has, however, moved to a new location. Still weighing my options.

3 thoughts on “To Tinder boys, with love”