Nick and Shawn have a heart to heart up in Nick’s room at the beginning of the episode. They paint each other’s nails, talk about their feelings, and braid each other’s hair. Actually, they both just call each other dicks and realize nothing new. Same old, same old.

Ben and Kaitlyn have their overnight date next, and at one point Ben starts talking to his horse. He’s midway through an Eliza Thornberry The Wild Thornberrys sequel when they get off the horses to feed some donkeys. Ben is rocking an awesome argyle sweater, and when they sit down for a picnic outside of a castle Kaitlyn exclaims, “This could be the beginning of forever.” The Hallmark guys should really get her number. She could have a lot of potential as a greeting-card writer.

Kaitlyn stands at the top of the castle where they will be eating dinner while Ben looks on from below. He yells, “Let down your hair.” She’s not Rapunzel, Ben. Nope. No.

Ben and Kaitlyn sit down to talk, and he keeps complimenting her. She’s funny, she’s exciting, she’s interesting…. blah, blah, blah. The two of them decide to spend time in the fantasy suite. Ben’s exclamation: “Best Sleepover Ever.” They wake up together and Kaitlyn can’t believe that she is falling in love with all of the guys. Shocker.

Just kidding, he’s really chill about it and he leaves and walks around outside looking up at her bedroom window. He’s just one boom box away from his John Cusack/Lloyd Dobler moment.

For Kaitlyn and Shawn’s overnight date they begin by playing golf. Kaitlyn buys Shawn a golfing outfit as ridiculous as Sharpay’s in High School Musical 2.

(For reference, she’s the one on the right.)

According to Shawn: Golf is a lot like love because it’s something you can do until you’re old and grey. Hmm.. I’m not that convinced. They decide to play a harmless game of Truth and Dare (as if any game of Truth or Dare is every really harmless), and Kaitlyn dares Shawn to streak through the golf course. As soon as he strips down she steals his clothes and runs away.

Shawn and Kaitlyn sit down to have a-nother talk about “the other guy.” She confronts him about all the gossip that Nick has said and he gets angry. Her response: “Oh, Shawn is PISSED.” Yeah, no duh, Kaitlyn. “The other guy” is like the worst conversation topic for their date together. Shawn wakes up and leaves Kaitlyn’s only to be met by Nick outside of his room. Drama. Shawn basically shuts Nick down for even talking to him and kicks him out of his room.

Nick doesn’t think that it was very classy of Shawn to tell him that he had just spent the whole day with Kaitlyn. Woah, Nick are you throwing around the word classy, really? That’s a new one. I didn’t know that you knew what that word meant. See here.

Chris Harrison appears for his weekly five-minute conversation with Kaitlyn, where they discuss the three remaining guys. Kaitlyn says that Ben has everything on her checklist. Nick makes her feel intense. Shawn is always jealous. This means that it is definitely the perfect time for a rose ceremony.

Kaitlyn can barely make it through the first sentence of the rose ceremony before she starts to cry. You can tell it’s definitely going to be one of those type of nights:

But nobody worry, Chris Harrison is there. He gives her a hug and tells her that everything will be okay and Kaitlyn finally emerges from the back room to cut one of the boys loose. She decides to send home the lovely, wonderful Ben H., setting him up perfectly to be the next Bachelor.

Cue a super long awkward silence while Nick and Shawn hang out in the rose ceremony room by themselves. Chris Harrison, do you think you could take a quick break from whatever Netflix show you are binging right now to break up this awkward moment? (Unless it is Friday Night Lights. If it’s FNL you can keep watching, Chris. I just finished it, and it is fabulous.)

Now it is time for the Hometown Dates, but I am pretty pissed because I’ve actually already met Nick’s family. I met them last summer, along with millions of other girls (and Shawn, who you know watched every episode of last season). I don’t need to meet his ten siblings again. Nick and Kaitlyn sit on a mountainside in Utah where Kaitlyn is going to meet both families. He starts comparing this experience on The Bachelorette with last season on The Bachelorette. Come on, Nick. SHUT UP. Actually, ABC, can you just roll the footage of last season’s Nick hometown date? I would enjoy that more than having to watch this.

Kaitlyn meets all of Nick’s 20 siblings (for the record, I was hoping that there would be a Steve Martin, Cheaper by the Dozen-style feel to the patriarch of Nick’s family. But there’s not). Bella, Nick’s youngest sibling, asks her if she is in love with Nick. The question of the hour. 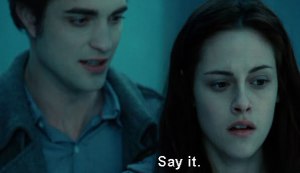 But Kaitlyn dodges the question like an old pro. The whole family talks, but I still am reminded of the last time. Apparently they all feel “differently” about Kaitlyn than they did about Andi. Okay. I definitely believe you.

Kaitlyn gets ready to meet Shawn and his two sisters. Shawn’s mom “couldn’t make it,” so she gets to meet his aunt, his dad and his two sisters. Kaitlyn totally passes the sister test, and they both really want Shawn to win. Shawn’s dad pulls him outside for a serious talk, and in true Shawn fashion he brings his beer. You know, just in case he gets really parched during the talk. For when his dad (sips his beer) asks him about (sips his beer) his future with Kaitlyn (super long sip of his beer).

Shawn admits to being in love with Kaitlyn, and they make out for a while. Kaitlyn seems as torn as ever. And she is crying again. This is almost as bad as when Cupcake started crying on the cliff.

Next week is The Men Tell All, where we get to see all of our favorites (Jared, Ben H., Ben Z.) and all of our least favorites (Joshua, Ian, Kupah, Tony THE HEALER, and many, many more). So until next time.

Stray observation: IT’S BEEN MORE THAN A WEEK SINCE I’VE HEARD ABOUT BRITT AND BRADY. ARE THEY STILL TOGETHER? HAVE THEY BROKEN UP?