It’s all coming up tonight on The Bachelor:

Did you know that Ben is “the greatest bachelor on the planet” and “to the T the perfect man?” After 30 seconds of this week’s episode, I learned both of those things.

This week’s episode opens with Ben changing clothes. So I’ll just say what every girl watching (and I’m assuming all of the boys watching) is thinking: FINALLY HE’S SHIRTLESS. This week’s episode starts with the first of many awkward group dates to come. The girls are massively excited, of course, because there is nothing better than going on a date with the man of your dreams (and seven other girls).

This group date is at a “Bachelor High School,” which eerily resembles the high school from The Breakfast Club. However, instead of having a crazy teacher lock them in the library, these girls have Chris Harrison as a teacher. Yes, you read that right, he is a TEACHER. How he is qualified to teach a science class is beyond me, but that is the first class he is teaching to the girls. The girls have to build a volcano using the ingredients “love,” “trust,” and “communication.” As we all know, love, trust and communication are the elements LO, TR and CO on the periodic table. We all took Chemistry, after all. (Okay, well at least we all saw Breaking Bad).

Thankfully the next class is lunch, finally a class that Chris Harrison is qualified to teach. But the best part, and my favorite part, is when the girls have to place states on a map. But I don’t want to judge the girls. Placing Illinois on a map is really hard. I really like the part where Becca’s team turns Illinois sideways and places it where Pennsylvania is. But geography isn’t easy. It’s not like there are any major cities or metropolises in the state of Illinois to help the girls recognize it.

Point of clarification: I’ve been informed by my expert fact-checker (okay, my mom) that they were in fact tasked with placing Indiana, not Illinois, on a map. However the joke works better with Illinois, so I’m not changing it.

The final part of the group date is an athletic competition. The girls shoot free throws and run hurdles. I patiently waited for the girls to trip on the hurdles and fall on their faces, but sadly they both made it unscathed. Honestly though, Amber really deserved a handicap on her hurdle race as her boobs were really slowing her down. Mandi wins the contest and becomes Homecoming Queen.

The girls have a mini-cocktail party after the contest. You remember the part of high school where you leave class and go drink fancy cocktails on a rooftop? That’s exactly how my high school experience went. At the cocktail party Becca and Ben play basketball and Ben almost strips a second time in order to make a jump shot. Sadly, he keeps all his clothing on. But in a one-on-one conversation, Ben finally makes out with his first girl: it’s Jennifer, the small business owner. She’s a sweetheart and I’m behind this relationship hundo p. No surprises though, Lace sulks after hearing that the Jennifer and Ben kissed.

UPDATE: Did you know that Ben is also “the best freaking catch in the whole world?”

Back at the house, Caila gets the first solo date. If you ask me, though, Caila is a little too perky. Maybe Ben should’ve brought her back to high school and let her return to her cheerleading roots. (I’m just assuming she was a cheerleader based on her size two waist and the fact she looks like she is about to break out in a cheer and a hurkey at any given moment.) Back on the rooftop, Lace apologizes to Ben for the night before. AKA the part of the night where she called him out for NOT MAKING EYE CONTACT WITH HER. Strike one.

Jubilee opens up to Ben about the fact that she was an orphan in Haiti until she was 6 years old. I assume anyone reading this is aware (via Ben’s Instagram of course) that Ben does charitable work with children living in poverty in Honduras. This shared interest/background is a strong sign in favor of Jubilee.

Lace interrupts a poor defenseless girl in order to have more time with Ben. Strike two. After her conversation with Ben (about Denver, I think), Lace returns to a very quiet group of girls. It is always the quiet ones you need to look out for, and shit is definitely going to go down.

Ben returns to the girls to whisk JoJo away to an even higher rooftop/helicopter pad. After a conversation where they pour out their mutual affection for each other, Ben and JoJo make out. This brings Ben’s make out count to 3. I don’t want to harp on this that much, but if this was a Bachelorette making out with 3 guys in one night she would be called a “slut” on social media. Double standards suck, man. JoJo walks away from the group date with the rose.

Caila is maybe the luckiest girl in the world, because this episode Caila and Ben get to go on with a car ride with ICE CUBE and KEVIN HART. I’ll repeat that so as to establish my excitement over this. THEY GET TO RIDE IN A CAR WITH ICE CUBE AND KEVIN HART. The best part of this is when Kevin and Ice “holla” at Ben. They want to give some love advice to Ben. However after a long chat, what it boils down to is Ice and Kevin arguing about whether or not Caila would like a cheap date or not. The boys make a quick pit stop to buy flowers for Caila. Ben’s only real comment about this part of the date is that “Ice Cube and I might have different styles for first dates.” I think we would all agree with that.

Ben and Caila get to know each other with the most hilarious peanut gallery sitting in the backseat. They can’t get through two sentences without Ice and Kevin cutting in. Finally they go test out some hot tubs, only to be interrupted by a naked Kevin Hart. Kevin assures the camera that he and Ice really helped Ben “close the deal.”

The second group date card arrives, and the girls are giddy with excitement. At dinner, Ben and Caila have a long conversation about what they are looking for in a partner. Caila opens up about her past relationships, and Ben and her have a real deep conversation. Ben gives her the rose and they walk to a theater where Ben’s favorite musical artist performs a private concert for them. They dance slowly and I swoon.

The next day the rest of the girls all go on the second awkward group date of this episode. Professor Chris Harrison is nowhere to be found as the girls show up to a “love laboratory.” Honestly, if I had realized how applicable my high school science class would’ve been to my later life, I might have paid attention more. The girls go through retinal scans, the girls exercise and Ben walks around and smells the girls. You know, all the components of a traditional first date. Ben smells the girls and remarks that the girls smell “sweet,” “fruity,” and “beachy.” Special props go to the girl who hangs in there as Ben says she smells “sour,” and the doctor compares her to sweet and sour chicken.

Ben is shirtless again for the physical tests where they sit in positions and the doctors measure their heart rates. Praise yeezus, he is shirtless again. As a side note, I really think we should be looking at the credentials of this “love doctor.” I’m not entirely convinced.

Olivia wins the love lab contest, as the doctor declares them extremely compatible. As a result, she gets one-on-one time. Ben takes her back to his room and they make out for a little bit. Later in the night when Amanda the single mom opens up to Ben about her children, Ben answers perfectly. He tells her that he wants a family and is willing to accept her children as his own if it works out. Unsurprisingly, Olivia wins the group date rose.

Finally it’s time for the rose ceremony. I honestly wasn’t sure we would ever arrive at this moment. Olivia is all over Ben tonight, proclaiming herself his “wifey,” and calling herself “Mrs. Higgins.” That’s a little aggressive though. At least when I refer to myself as “Mrs. Gosling,” I am joking. (It’s okay guys, one day he and I will meet and we’ll fall in love.)

Back in the house the girls are upset with Olivia for hogging Ben all night. She gets called a bitch by a number of different girls. This ceremony is a little stressful and awkward and at this point I would love it if Kevin Hart would appear from behind the curtains and lighten the mood with a stand-up set. More Kevin Hart is definitely what this show is missing.

Lace talks to Ben and opens up to him about her past as an “ugly teenager.” She is really opening up to him and being totally vulnerable. 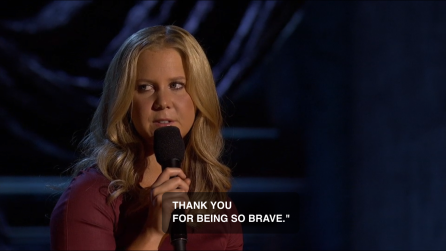 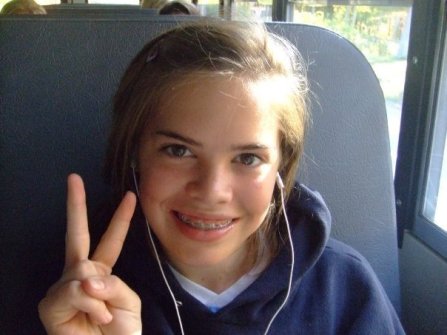 (No shame about this photo by the way. I was an early a pacifist, as evidenced by my peace sign. Peace. Love. The Right Reasons.)

Ben talks to Lauren B. for a little bit and gives her a photo of the two of them together. He was thinking about Lauren B. all week, and he wants to reassure her feelings. Ben gives Amanda a gift for her children. This is the gist of the cocktail party, I’m sure other things happened but these were the highlights and the only parts I was fully watching.

Finally, Ben starts the rose ceremony with his ABC-mandated line: “I honestly did not expect that I would be feeling what I am feeling this early on.” Okay, we get it. Literally every bachelor has said this phrase in his season. You really had no idea this was coming? I’ll summarize the rest of the rose ceremony below:

Survivors: Amanda, the single mom, Becca and Amber, fucking Lace (this is what I will be calling her from now on), Lauren B. the flight attendant, and the twins.

Fallen Victors: Sam (sweet and sour chicken), Mandi with the crazy eyes, and a few others whose names I can’t remember.

My pics: Lauren B. (obviously), Jennifer, JoJo and Jubilee.