Oh my God, we’re back again. Brothers, sisters, everybody sing. Gonna bring the flavor, show you how. Gotta question for you better answer now, yeah.

According to Caila there’s a “weird vibe in the house.” But I can’t think of any reason why there would be a weird vibe amongst a house full of girls all competing for one guy. Chris Harrison arrives to ship the girls to Las Vegas, “the marriage capital of the world.” And I know what you’re thinking. Is this show going to end seven weeks early? Sadly, no. Although I am positive that by episode’s end at least one girl will have a date with Ben in front of an Elvis impersonator (namely Becca, I saw the trailer).

The first date card arrives to the girls’ “palace,” and it’s for JoJo. The rest of the girls are all like:

After the commercial, the producers cut to a great shot of the twins on a treadmill. According to Haley and Emily, they do everything together. I’m pretty sure they are the same person. I think if we learned anything from Lindsay Lohan’s one-woman show, The Parent Trap, it’s that video-editing has gotten really advanced these days. (Also that true love conquers all and that England is better than the U.S.*)

Ben arrives at the hotel to pick up JoJo for their date which of course begins with champagne and a helicopter ride. I’m fairly certain that The Bachelor has stake in NetJet, that’s how many times Ben takes these girls up in the air. The helicopter knocks over the table with the champagne on it and almost hurts (kills?) Ben and JoJo. They make out a little before going up in the air to take a plane ride around Vegas.

Back at the hotel the girls get the group date card and Olivia is on it. This of course infuriates her because she, like, “wanted some one-on-one time in order to keep my head up.” She has some real stank face as she sits on the couch sulking.

JoJo and Ben have drinks and share their mutual attraction and feelings for each other. Shocker, JoJo has been cautious recently because of a bad breakup. I refer once again to Jojo’s break out hit, Get Out (Leave):

Ben comforts her and asks her if she is ready to be with someone again. I can answer that one for you, Ben. Of course she is. After she opens up to him a little more he gives her a rose. “She’s got intelligence, she’s got humor.” Some might even say she’s the total package. (TBH I don’t know who “some” are.)

In the meantime, I am waiting for another private concert featuring one of Ben’s favorite bands. (The past two episodes he has held private concerts for his one-on-one dates.) Maybe this week you could bring on the Spice Girls, Ben. Because if anyone has the power to bring those five girls back together, it is definitely ABC. The night ends with Ben and JoJo enjoying drinks and fireworks on the rooftop of some Las Vegas skyscraper.

For the group date this week, Ben has set up a talent show for all the girls. The twins are “ahead of the game” because they took Irish step lessons when they were younger. This is probably the first time in recorded history that Irish step lessons have ever gotten anyone “ahead” in life. Olivia’s talent: being an insecure, crazy girl. (It’s actually pretty hard to be that girl, guys. Give her some credit.)

The talent show starts with the twins doing Irish step dancing. Don’t worry, they are “in it to twin it.” (BTW, this will be my new catch phrase.)

Lauren juggles, Jubilee plays the cello, and craziest of them all (she is always the craziest of them all), Olivia pops out of a stripper cake and does some burlesque dancing. I think calling what she did “burlesque dancing” is kind of generous of me. It was actually more like a series of awkward flails. Where ABC got a stripper cake on such short notice is beyond me. Maybe they stole it from the set of Scandal? (I should admit I haven’t seen Scandal in a while.)

Olivia’s horrible performance sends her into a downward spiral. She feels that Ben was probably “mortified” by her performance. Ehh, maybe. But honestly I think he’s a little bit too nice of a guy to be “mortified” by a girl. RELAX. Watching Olivia on this show is getting exhausting. Once Olivia has composed herself, or attempted to compose herself, the whole gang goes to a cocktail party.

When Caila steals Ben she becomes a “sex panther.” (Ben’s words not mine.) Interesting approach, Caila:

When Lauren H. and Ben have alone time they only talk through a puppet. Lauren H. walks away with two kisses, one from Ben and one from the puppet.

Add Olivia’s performance to the list of things she is insecure about. This list also includes “dating someone who is seeing a ton of other girls,” and her toes. Olivia and Ben’s one-on-one time basically consists of her telling him about all of her problems. Ain’t nobody got time to listen to your problems Olivia! He is not your therapist.

Lauren B. and Ben have some time alone where they make out and talk about how fast she is falling in love with him. When one of the twins gets free time Olivia skulks over to try and steal him from her. Olivia wants to start over. OMG shut up. Please shut up. She apologizes to him for behaving weirdly earlier. Please just be quiet, your voice is grating.

The group date rose goes to Lauren B. because Ben is trying to validate his relationship with her. THANK GOD. She is a beautiful person. I would marry her. (Well probably not, but I would definitely want to be her best friend.) LAUREN B. FOR AMERICA 2016. Yea, you heard me. I just started a campaign for the presidency on her behalf.

When Ben delivers a wedding dress to Becca for her one-on-one date all the girls make jokes about Becca being a virgin. Seriously girls, take the high road. Leave her alone, it’s a personal decision.

Becca arrives at a chapel where Ben gets on one knee to ask her, “Will you marry… other people with me?” Yep, Ben is ordained. Let me be the first to ask, Ben will you officiate my future wedding?

Ben and Becca officiate a few weddings, including one with a guy wearing a fedora. So that groom is making at least one poor choice today. Dear groom, you’re not Channing Tatum:

(“Like most fedora wearers, he had a lot of inexplicable confidence. -Aziz Ansari” -Amy Biggart)

Ben takes Becca to a salvage yard for old Vegas signs, which turns out to actually be a really cool place. Ben wants to know whether Becca “can love, whether she can feel.” Well, I’m pretty sure if she couldn’t feel she would be a sociopath. And if that were true, you’re right. You would probably want to know about that sooner rather than later, Ben. (For your own safety, at least.) Ben keeps telling her that she should really “feel.” Ben, please make it stop.

Ben and Becca talk about her virginity and his sexual history, and the conversation ultimately comes back to their shared religious beliefs. The two make vows to each other about their future and then they make out. Becca leaves the date with a rose.

Back at the house Haley and Emily get a two-on-one date. They are originally from Las Vegas and Ben and the twins drive through their old neighborhood. Ben goes to meet their mother and their (twenty?) dogs. They show him their childhood bedrooms and try to impress him. As a look-alike twin, I am pretty sure I would feel pretty awkward in this situation, so I have mad respect for these girls.

Haley (or Emily): “He’s going to need to send one of us home, I never thought that would happen.”

How did you not see that happening? Even if you made it to the final two, one of you would lose. THAT IS HOW THE SHOW WORKS. *sigh*

Ben talks to the mom to hear about the girls and he inevitably sends Haley home. (Though, technically she is already home. Like literally in her home right then.)

Finally we have arrived at the cocktail party. Thank god, it feels like it has been a decade. At the cocktail party, Jennifer steals Ben for a hot sec before Olivia comes over to steal him. Olivia wants to eat cake with him and “move forward” with their relationship. Olivia says, “What planet was I on this week?” Idk, Olivia, maybe Planet Weird? (Remember the DCOM Stepsister from Planet Weird? Classic.)

Olivia also talks about the fact that she is not “insecure.” May I refer you to last episode, Olivia, with the horrific “toe” incident. 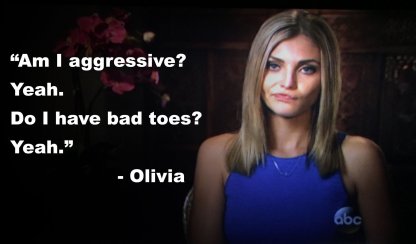 Finally it’s time to give out the roses. I’ll summarize the rose ceremony below.

Casualties in the All-is-Fair-in-Love-and-War: Rachel and Amber.

Final comment: Poor Rachel. She’s unemployed and single again. (Although, her life is my life in six months. So poor me also.)